Ships are going to be sailing on 100 per cent organic and sustainable fuel in the foreseeable future. Twente company BTG from Enschede is preparing for investment and wants to set up a new technology company this year, where crude pyrolysis oil will be converted into an advanced shipping diesel. It will be the first refinery in the world where biofuel is made from pyrolysis oil.

The new company will be called BTG-neXt. BTG-neXt will first focus on the construction of a demonstration refinery in which fully renewable shipping diesel can be produced from pyrolysis oil. The refinery is to demonstrate that continuous production is possible.

The new demo factory has an intended capacity of 1000 tonnes of shipping diesel per year. René Venendaal, CEO of BTG: “This is sufficient for demonstrating the technology works and serves as the basis for further upscaling.” According to Venendaal, this is a million-dollar investment. “We are investigating the exact amount involved.” The goal is to create commercial factories with a capacity of a few tens of thousands to possibly hundreds of thousands of tons of shipping diesel per year, based on the demo.

BTG previously followed this route with the production of pyrolysis oil. BTG-BTL was established for this in 2008. Additionally, the Empyro factory was built in Hengelo, where it was demonstrated that making oil from sawdust was not only technically but also commercially possible. Empyro has been part of waste management company Twence since 2019. This year, BTG-BTL received the first orders from Swedish and Finnish companies to build almost exact copies of the factory in Hengelo. In Sweden and Finland, the factories will produce pyrolysis oil from the remains of sawmills.

Technology from Twente with global impact

The technology to develop oil from natural residual waste such as woodchips and roadside grass by pyrolysis was invented thirty years ago at the University of Twente. It is the same process that takes place in the earth when fossil oil is formed, except that with this technique, the process only takes a couple of seconds instead of millions of years. BTG was founded in 1987 as an independent private company that specialised in the conversion of biomass into energy, and the creation of spin-off companies that bring new technologies to the market. In 1993, BTG took over the development and upscaling of pyrolysis technology from the university.

The plans for constructing the demonstration refinery that BTG has set out until 2030 have been received with enthusiasm. For GoodFuels, a pioneer and market leader in sustainable biofuels for shipping, the plans offer sufficient reason to investigate the possibilities of a joint investment in the demo factory.

GoodFuels CEO Dirk Kronemeijer: “in the past five years, GoodFuels has paved the way for biofuels in shipping. Together with partners like Boskalis, Rijksrederij, the Port of Rotterdam, Norden and IKEA, we have shown that these fuels will play an indispensable role in making shipping more sustainable. The hard part is scaling up without making any concessions to the sustainability of the raw material used. This project meets all crucial success criteria, and we would be very proud if we can enter into this vital development for the Netherlands together with BTG.” 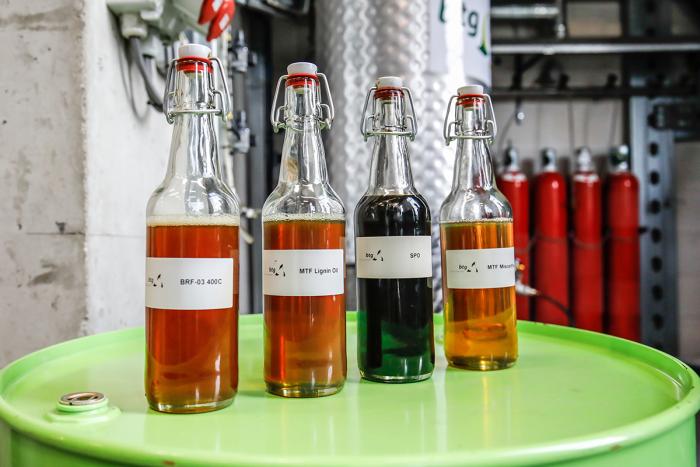 The intended location for the new demonstration factory is “as close as possible to home”, according to Venendaal. “Just like with BTG-BTL and Empyro, we must be able to stay on top of it and be able to provide the necessary services immediately.” GoodFuels has the intention of putting the test volumes on the market to optimise the commercial business case. Given the preferred location for the demo factory, the company initially focuses on regional inland shipping. With this, a circular economy approach can be developed for shipping as a transport sector on a regional scale.

Venendaal: “Ships, especially those at sea, are currently powered by low-grade fuel oils, almost tar-like in nature. There is a lot to be gained in terms of sustainability.” The low-sulfur shipping diesel from pyrolysis oil also meets the stricter standards that will apply to sulfur emissions in shipping as of 2020.

In Twente, many solutions are being developed for producing sustainable energy, and for saving energy in smart ways. Some hot topics are wind energy, solar energy and bioenergy.

Innovating the ground beneath our feed

Twins from the UT improve education and the business community

The future of our transport is electric and smart

Strong ambition RES-Twente: generate half of the current electricity consumption sustainably by 2030

Farmers from Noord Deurningen find a solution for nitrogen problems

Both disappointment and euphoria during the world championships

RED E energy consumption equals that of a sandwich maker