Drought has become an increasing problem in the Netherlands in recent years. Nature and agriculture especially suffer from this drought. However, drought also means that we do not have enough drinking water. We have all heard the news messages in the summer about using as little water as possible and not filling up swimming pools in the garden. Boike Damhuis (21) has developed an irrigation system for agriculture that can reduce the amount of water used by 90%.

This article is part of a series called “Twente Leeft!” (Twente Lives!). You can read personal stories here about living and working in Twente. Twente is a nice place to be, according to the talents we meet. The beautiful nature, space, the down-to-earth mentality; they all characterise Twente. There are also plenty of career opportunities! Twente has many innovative, international and future-proof companies that are desperate for staff. Want to know what Twente has to offer? You can find Boike Damhuis story below.

Combining his passion for technology and the agricultural sector

“No one was surprised when I eventually chose a technical study. The Technical Business Administration study at Saxion allowed me to develop my passion for technology even more, and I also learned a lot about how companies work. I did an internship at Flexxolutions during my study and later went to Veha Plastics for my graduation internship. I now work there as an R&D Engineer, but I am also responsible for sales.”

Boike feels completely at home at Veha Plastics because he can also pursue his passion for agriculture here. “My grandparents used to live on a farm, and my parents moved to the countryside a few years back. A cousin of mine has a cattle farm, and I started going there regularly. This got the ball rolling, and I developed a passion for the agricultural sector. I can also test and try out all my ideas and innovations on my cousin’s farm.” 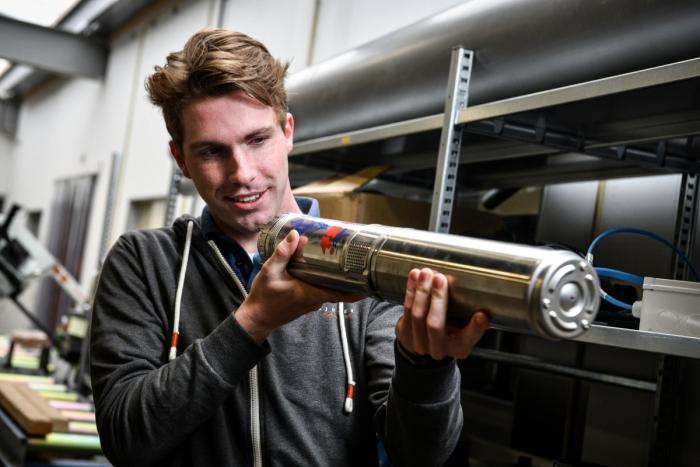 Drought in the Netherlands

Boike doesn’t think of himself as someone who improves the world, but he did develop an innovative system for the drought in the Netherlands. “I like the challenge of coming up with solutions to social problems, especially when technology is involved. It is impossible to combat drought since that involves changing the entire climate, but we can look at how we can moisturise the soil in a good and sustainable way.”

Drought is a significant problem in the Netherlands. We often see large water sprayers on fields and meadows, which spread tens of thousands of litres of water per hour on the farmland. These sprayers are not necessary, according to Boike. “Water sprayers spread around 60,000 litres of water on farmland, per hour. A big part of that water evaporates before it even reaches the grounds or stays on top of the crops instead of reaching the roots. Not to mention the fuel that the water sprayer uses and all the labour involved. There had to be another way!” 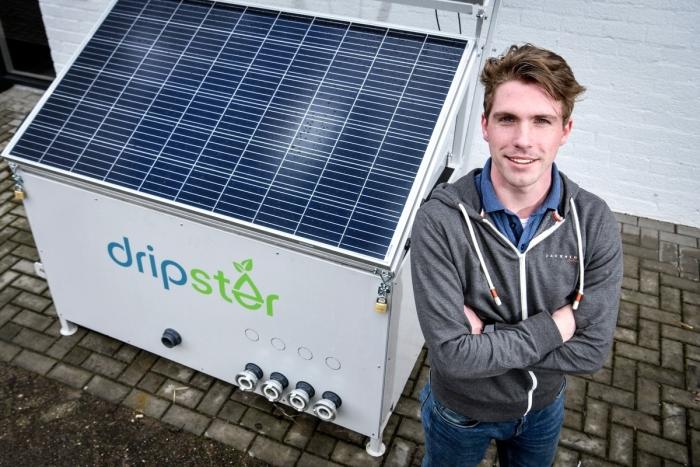 And there is another way! Boike’s graduation project at Veha Plastics revolved around an innovative system for proper irrigation on agricultural land, and the Driptape and Dripster were created. “The roots of crops and plants need water to grow properly. Our drip irrigation system consists of a tube with holes – the Driptape – that you put a few centimetres into the ground, near the roots. This allows you to water the soil very precisely, exactly where it is needed.

A weather station is also installed on the farmland to complete this solution. It acts as the “brain” that measures everything. The weather station signals when the soil needs water. The pump, the Dripster, allows the water to gently flow through the Driptape, moisturising the soil at the right place. The pump runs on solar panels, and it can even be linked to an app. Boike: “The farmer can control the pump from wherever he wants through this app. This way of irrigation does not only save thousands of litres of water per day; it also ensures that the crops are properly watered. You won’t damage the plants by spraying water over it when it’s very hot; you let the plant grow in the right way.” 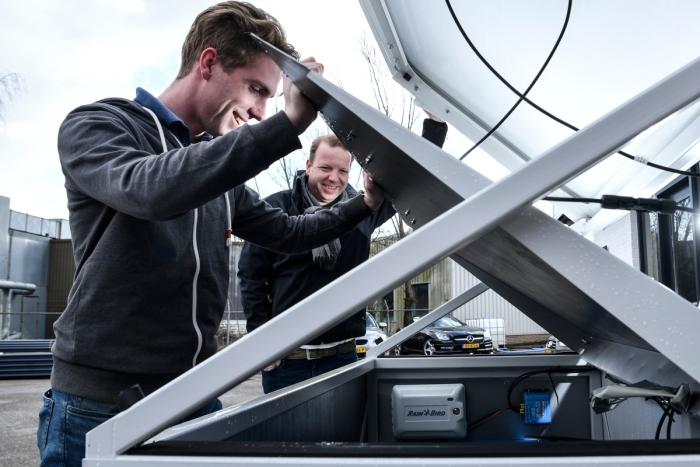 For now, Veha Plastics is mainly focused on Twente when it comes to the Driptape. Boike: “this way of irrigation is starting to become a big success, and that motivates me to continue working on it. I’ve spoken to some farmers, and they are very enthusiastic about the system. I think that’s great! I cannot wait to visit more farmers this summer and see how it is going.”

Boike loves Twente, both when he is working and in his spare time. “I am someone who would never leave Twente. Twente is the nicest place to live; everyone is very welcoming, and the atmosphere is great. I still live with my parents, but I would like to find a house of my own. In Twente, of course, and preferably in the countryside.”

Boike is always busy, even in his spare time: “I don’t like doing nothing. I like thinking of something new and trying it out – on a small scale – at my cousin’s farm or in my parents’ vegetable garden, for example. I also like going out with my friends during the weekends. I have a large group of friends in Ootmarsum, and we are a very entrepreneurial group. The coronavirus is throwing a spanner in the works at the moment, but we normally do a lot of fun things together.”