You could call him the Gyro Gearloose of Twente. In September 2019, “De wereld draait door” declared him and his company, Inreda Diabetic, a National Icon. This meant he could not be forgotten at de Rode Loper on the 6thof January 2020. Robin Koops from Goor, a technician in heart and soul, developed an artificial pancreas. With it, people with diabetes can drastically improve their lives. The device is unique compared to other aids in diabetes.

Robin Koops, who has had diabetes since 1995, has been working on a life-changing aid for the past 16 years. The artificial pancreas has been applied to his body since November 2018, and he has since seen his health improve considerably. The device, which is the size of a smartphone, continuously monitors his blood sugar level and quickly and automatically delivers the calculated amount of insulin and glucagon. This medically digitalises the function of the pancreas, which is a first. Puncturing, measuring and injecting are (almost) no longer necessary.

Robin is the first, and without a medical background at that, to make an invention that can forever change life with diabetes. He remains very sober, even though he more or less admits that “the chances of his life’s work leading nowhere are getting smaller and smaller”. There are devices already that measure the sugar level, however, the difficulty lies in the process after the measurement, Robin tells us from experience. After measuring, persons with diabetes must decide for themselves how much insulin the body needs after, and that is usually a delicate matter.

During de Rode Loper 2020, Robin Koops is wearing the artificial pancreas on his belt. 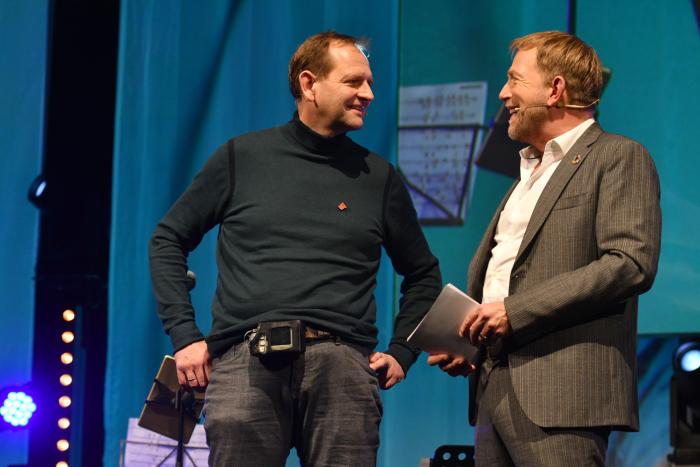 Robin has been working on his invention since 2003. He combined his ideas, experience and knowledge in the shed in his backyard with two of his friends: diabetes nurse Joost Bonhof and software programmer Rob Koebrugge. They developed a prototype of the artificial pancreas together. It was a combination of two computers, so not yet suitable for easy carrying, but a start was made. The device was much smaller in 2011. It was about the size of a laptop. In 2014, the fourth prototype looked like what Robin showed on TV and during de Rode Loper 2020. He talked about not having a choice, there; he had to work on a “solution” for his condition. He did not want to be dependent on care and support.

Robin could make his invention because of his personal experience with this condition. The device is fully tailored to the needs of the patient. The comfort lies in the communication between the body and the system. The patient no longer has to think for himself. Robin’s device removes the “human” factor from the process. It completely takes over the puzzle and prevents complications. From his own experience, Robin can say that this is the greatest profit of his invention. “Not having to worry about it” gives people with diabetes a normal life. Also, Robin’s device ensures that the body becomes healthier in the long term. Because the artificial pancreas brings more balance in the body, medicines can be attuned more precisely. That makes you feel better, overall.

In a few months, in May 2020, Robin’s artificial pancreas should be certified. After that, the goal is making the product available for more patients. Robin’s company Inreda Diabetic is preparing for this. With a second location in the middle of the country, it should be easy for people to get the device fitted. Both the company and Robin will not leave Twente, though. Both will stay in Twente, and it is where the device will be developed further. The connection with the UTwente must also be maintained. In recent years, he has been working closely with students from the university, who often also deal with diabetes themselves.

In addition to putting the artificial pancreas on the market, Robin will continue to develop. According to Robin, the device can improve in appearance, the cosmetic effect. He wears the box on his belt now, but it should be suitable for inconspicuous wear underneath clothing. It is also important that changing the batteries will become more patient-friendly. Right now, the device could start beeping at 10 pm when a change of batteries is needed. Robin’s artificial pancreas should be just as unobtrusive as the real one. Diabetes or not, a normal life is the goal.