What can you do for the world? Stewardship is in our Twente DNA. If we take care of our environment on our scale, we already achieve many quick wins. If we can develop solutions for global issues, we contribute to the future of our planet. In short, the world needs Ondernemend Twente. With the Rode Loper, we inspire entrepreneurs in Twente for the future at the start of the new year.

‘We cannot do it alone”

The evening started with music. A cover of “Ik kan het niet alleen” (I can’t do it alone), by the RED band consisting of entrepreneurs from Twente, sounded through Hangar 11. This song conveyed the message that we have to work together to improve Twente. You cannot do this alone. This message of connection was visibly appealing. The host of the evening, Harm Edens, said: “You as entrepreneurs have the opportunity to have an impact on the world of tomorrow with your actions of today, but you cannot do that without others.”

After this musical introduction, the entrepreneurs in the room were visually welcomed with the film “Age of Stupid”. Harm Edens: “The film, made in 2009, seems to have predicted the present. One of the images in the film showed a burning Sidney Opera House. This is no longer unthinkable. Everyone who has seen the terrible fires in Australia on the news knows that this is not just a doom scenario.” You were made aware that people, but especially entrepreneurs, have the power to change the misery in the world. “We can ensure that we pass the planet on to our children and grandchildren, and that your company still exists in 40 years. That is sustainable business.” 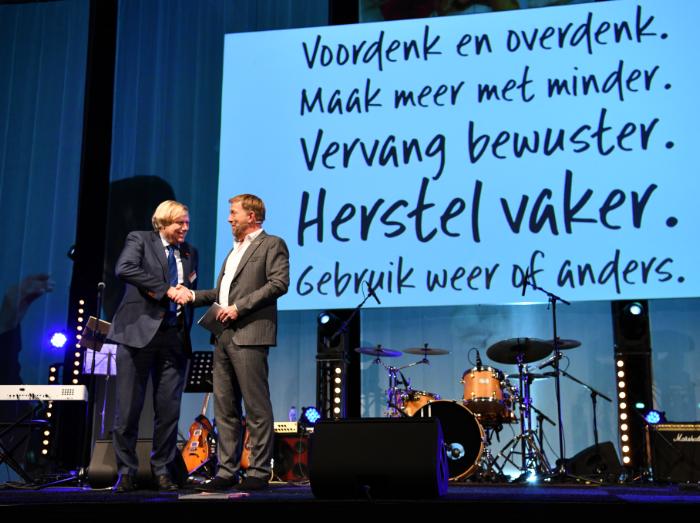 After the introduction, presenter Harm Edens, “Mister Sustainable”, spoke. He started by mentioning the key points of the evening: connection, collaboration, Twente as a green top technology region, solutions from Twente for world problems and, of course, the never overestimated importance of talent. He delivered a pitch about Project Raindance, in which he is involved. The project is concerned with the restoration of nature. By allowing nature to flourish again, our planet can process more CO2. The perfect way to immediately have an impact, and give companies more time for the energy transition, Harm Edens says. Nevertheless, entrepreneurs need to do this eventually. The economy must change. Market thinking in which only profit and money are central have shown their bankruptcy in today’s world.

To deepen the popular term “purpose thinking”, and especially to inspire everyone in the hangar, the book “Het Grote Gevecht” (The Great Fight) was discussed by Harm Edens and writer Jeroen Smit. Het Grote Gevecht is about “our” Paul Polman, Twente’s former Unilever chairman, who focused on making Unilever (the world’s largest NGO) future-proof. His method was not always received positively at the time, but we now know that we must work together for a sustainable world. As a pioneer from Twente, Paul Polman has known this for years. With today’s knowledge, it appears his often-rejected method was right. “Polman is a hero if you ask me, and as a journalist, I have decided to investigate this”, Jeroen Smit says. Only responsible companies are successful, according to Paul Polman, and making money should never be the goal. Companies should take care of the society that produces them. Paul Polman is someone who is guided by his moral compass, and according to Jeroen Smit we need more leaders like him. “Polman started almost all his lectures by saying there are 8 million hungry people in the world, and that it’s our job to do something about it. We, as entrepreneurs, must care about this”. It may take extra time and energy to ensure that you produce sustainably, but it also gives you energy back if you do work that gives you satisfaction. Finally, Jeroen wanted to convey the message that we must dare to fantasise and dream. Allow yourself to have a fantasy in the long term that contributes to a better world, and who knows, it might become reality. “Do not underestimate your potential!” Those who do not dream do not have a path. 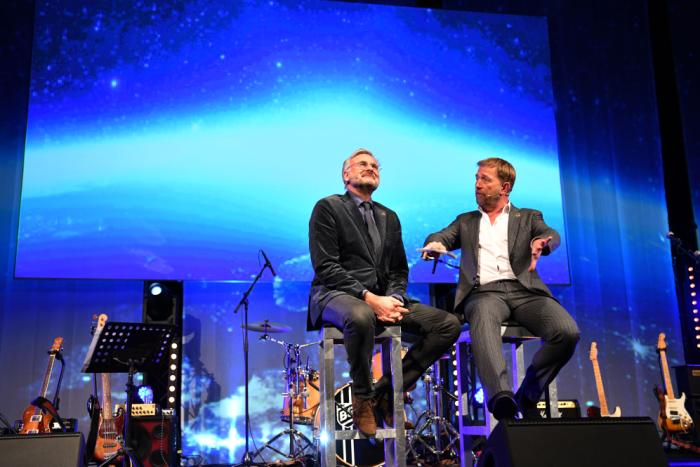 How do Twente individuals work on a sustainable future? The solution lies with the ‘minds of tomorrow’: entrepreneurs with an ingenious spirit and a clear moral compass. In short, the ones who give shape to the Twente of tomorrow. For inspiration, six of these minds of tomorrow were interviewed on stage.

Twente’s Gyro Gearloose. He is a machine builder who, on his own initiative and with his experience as a diabetic, sought a solution to diabetes. This condition holds the lives of many people in its grip. He invented, and made, the artificial pancreas. While Robin was standing on the stage, the little box on his belt was clearly visible. To get to where he is now, Robin Koops has demonstrated immeasurable perseverance, overcome setbacks and ultimately achieved success. Robin’s message for other entrepreneurs is this: “Don’t be afraid to share your ideas. You can only multiply if you can also divide.” In other words, we have to do this together.

After that, Harm interviewed Emiel Kwekkeboom. Emiel Kwekkeboom is a chef at heart but is modest about his performance even though he has won great prizes. He has worked at many successful restaurants in Amsterdam but returned to Twente to start his own restaurant Joann. Emiel has always longed to go back to Twente and realised he can make his career here just as well as in the Randstad. With a menu containing only seasonal dishes, he prevents food waste. “It’s very simple, really”, Emiel said.

Herman Reinten from Reinten Infra was the third to take place on the stage. According to Herman, the core of his talent is “making people and their business shine”. For Herman, circularity is the new standard. The challenges that this offers should not be seen as obstacles. Scarcity is an important bottleneck in our economy, in addition to climate issues. A circular economy is the solution.

The fourth “minds of tomorrow” are brothers Tom and Bart Grobben from “de Nieuwe Melkboer” (the New Milkman). When these innovative farmers took over the milk business from their parents, they decided to take it into a new direction. In addition to producing cow’s milk, they also produce Twente soy, a unique product. In the world of today and tomorrow, producing more plant-based foods and thus reducing our dependence on animal products is crucial, also for reducing CO2 emissions. Tom and Bart are innovative farmers that characterise Twente: farmers who take matters into their own hands and come up with solutions themselves.

Student Carlijn Joosten was the last one to be interviewed by Harm Edens. She also sees the need for working together for a better future. That is why she organised the two-day event “Create Tomorrow”, where 1000 students, scientists and the industries come together to solve challenges that the future offers. 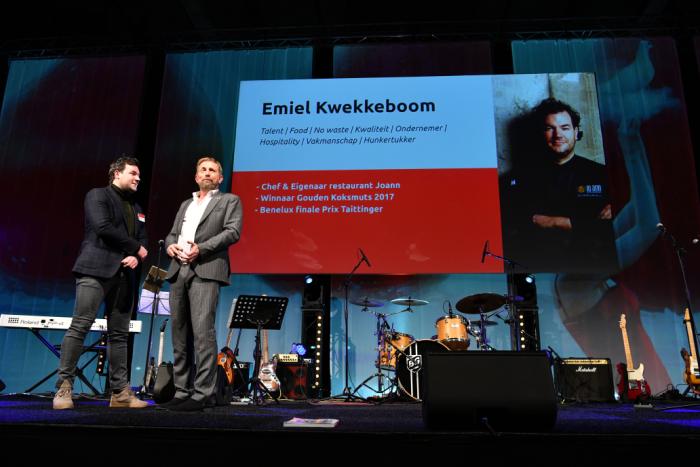 This is how individuals from Twente all work to have their contribution. But what does Twente do as a whole? That was what the second part of the evening was about, Ondernemend Twente’s strategic agenda items.  However, the core idea behind all these messages is, again, the importance of talent. The talents that we attract or retain control the future. Three top entrepreneurs and members of Platform Ondernemend Twente talk about these agenda items briefly but clearly.

Ad Louter, director of Urenco, presented the plans for accelerated construction of the high-speed railway connection between Amsterdam and Berlin. Twente’s position between these two economic centres is good for the economy. Twente is located on Berlin Boulevard and is the hub to Germany.

Affordable and sustainable homes in Twente

René Venendaal, director of BTG, expressed the last key point: “Twente farmers as energy suppliers”. Twente farmers in Noord-Deurningen are already producing green gas by fermenting cow manure from their farms. In this way, new sustainable and renewable sources of energy are created in the region. The objective is to have Twente function on renewable energy for 30% by 2030. Twente serves as a testing ground for the development of new technologies. 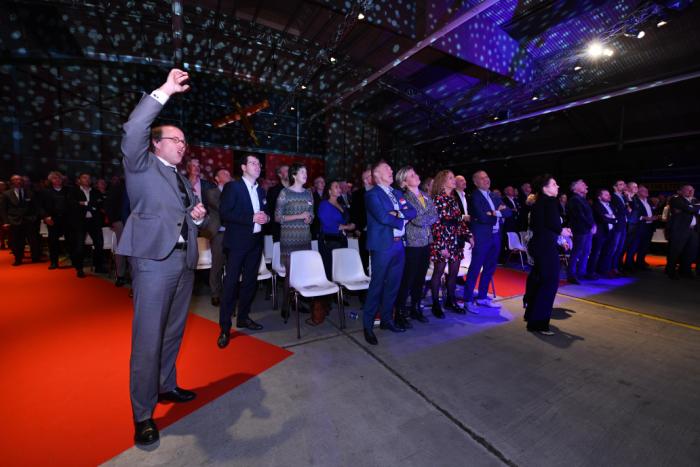 In conclusion, after RED band presented the message of cooperating once more with the song “You’ll never walk alone”, the attendees raised a glass to the new year. That we may be one step closer to a sustainable future next year. Twente’s talent is the future.