The internet has become a part of our daily lives. Whereas at the end of the last century, the internet was only suitable for the most patient among us, we now use it for virtually all communication and work. Florian Overkamp, the founder of Speakup, was lucky enough to study at the University of Twente in the 1990s and thus had access to a fast internet connection. He experimented with it, and his passion for fast connections never stopped.

Although the internet can no longer be excluded from our daily lives, it truly is something new. In the 1990s, the internet was running on the copper telephone network for the majority of users and was very slow. At that time Florian Overkamp was studying Computer Science at the University of Twente, and he had access to high-speed internet that ran over a fibre-optic network. Together with other students, he researched various broadband applications and together they decided to take matters into their own hands: there had to be a data centre in Twente.

During this period there were primarily data centres in the Randstad. According to Florian, it was about time somebody would establish one in Twente. Local businesses and the regional economy could benefit enormously. Everything was within reach. The present fibre-optic network was mainly used for scientific research. A shame, of course. Also, across the street from the University of Twente was the perfect building for a data centre. The data centre built then still exists today: the data centre of Equinix Netherlands.

The University of Twente, the municipality, the province and others had to collaborate to realise the data centre. This also gave birth to NDIX: the first cross-border internet exchange, which provided a huge boost to the attractiveness of the business community in Twente.

But even now, Speakup needs to work together with various companies and knowledge institutions in Twente. For example, they participate in multiple projects at Saxion University of Applied Sciences and the University of Twente. They are also affiliated with the TalentIT Twente Foundation, as keeping IT talents in Twente is important.

Hearing from a professional: Jeroen from NDIX on the safety and quality of the internet

In 2003 Florian Overkamp founded Speakup, and since then several innovative telecommunications solutions for the business community are being developed. It was precisely through the integration with the data centre that so many possibilities arose, such as the VoIP as a service which became accessible to smaller companies. This allowed Speakup to offer SMEs the same telecom facilities that were normally only possible for large corporations. Within a short time, the internet became more and more accessible to everyone, and Speakup grew along.

2020: Working from home and a changing market

In previous years, we already worked from home, but the corona crisis accelerated this. As a consequence, changes appear not only in the demand for data. There is also a major shift in the use of communication tools. Where we used the mail or the phone before, we see that video calling is the way to go nowadays.

This means, among other things, that Speakup has to respond even faster to changes in digitisation. For example, they quickly added Direct Routing for Microsoft Teams to their portfolio. This allows companies to make calls in Microsoft Teams through Speakup's network. There is more to come, for sure. Because of the rapid changes, Speakup wants to be future-oriented.

We see digitisation developing rapidly. The role of Dutch Tech companies is also becoming increasingly important. Florian: “We think about how data is transferred, managed and then sent. For example, as a telecom party in the Netherlands, we need to establish a kind of trust base to ensure that possible abuse by tech giants is prevented. We like to have a good alternative, so we stay safe and reliable for our customers.”

The folks at Speakup are aware of the upcoming generation. Nowadays, children are used to communicating asymmetrically with each other, which means that they communicate on different channels. This group of entrants to the labour market will also bring this way of asymmetric communication to the workplace. Florian explains: “It shouldn't be about on what device -the phone on your desk, your laptop, your smartphone, WhatsApp or Snapchat - I can reach you, as long as I can reach you. Tomorrow users decide for themselves how they want to be available.”

All these communication possibilities can also be disruptive. Speakup, therefore, wants to be the guide for its users to the world of new communication. By 2030, the company aims to connect millions of people across Europe daily. Whether it's by phone, chat or video call, they're going to find out together. 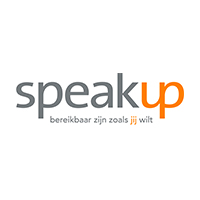 Safely connecting to the big cloud thanks to NDIX

Hearing from a professional: Jeroen from NDIX on the safety and quality of the internet

Working from home? Business as usual!

Experience a personalised Military Boekelo on your smartphone

Drone radar installed at a testing ground in Twente

Further development of AR and VR