Gyula really like she’s from Twente. However, she grew up in the Achterhoek, in Rekken, which is admittedly on the border with Twente. She moved to Enschede to study and has always stayed there with great pleasure. Gyula studies in Utrecht for two years, but did want to leave her friends, family and the pleasant environment behind. Fortunately, this was only for a short time, and she soon found plenty of challenges in Twente. She now works as a New Business Developer at ADG Dienstengroep, and she has founded the Young Twente Board.

Gyula Rychtarski can be described as a colourful and energetic person. She has a strong presence, and she knows how to use this in a positive way. Perhaps even more important is her Twente sobriety. Gyula does not like to talk about “achievements” but is very modest and has both feet on the ground. Gyula is from Rekken, a small village on the border of Twente and the Achterhoek, “but actually, I feel like a Tukker”, she says. Her parents are not originally from the region but moved here because of her father’s work. He worked at the TBS clinic in Rekken. Gyula lived happily in Rekken for 17 years, until she moved to Enschede to study at Saxion. She still lives there, and she likes it. In addition to her job and her role as chairman of the Young Twente Board, she is also chairman of the local volleyball club. She does volleyball at a competitive level. “We are playing for the championship this year, so it’s a nice season. I also like to play board games. I am a bit of a nerd. It takes up all of my time after work. 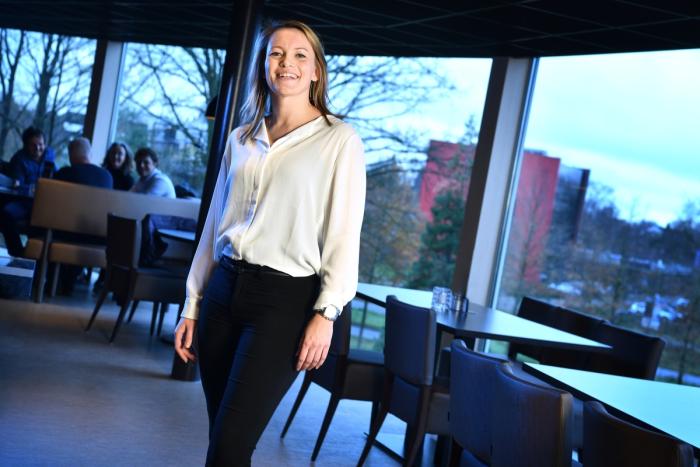 Gyula studied at Saxion, and then worked as a debt counsellor at the Stadsbank Oost Nederland for four years. However, her ambitions and inquisitiveness extended further, so she eventually made a move to start a Master’s in Social Sciences in Utrecht. She travelled back and forth from Enschede to Utrecht for two years. Despite the time this travelling took, she did not see it as a disadvantage to live in Twente, on the contrary. She could have easily left but did not want to pause her life in Enschede because of her studies.

“You are one in thousands in the Randstad, whereas you easily get the space here to show what you can do and develop yourself.”

In other words, she chose to travel back and forth by train very consciously. Her boyfriend Steven also worked in Amersfoort at the time. Steven studied biomedical technology, but it was hard to find a job even for technical talent at that time. “We then talked about whether we would like to go to Utrecht. We immediately knew we did not want that since we did not want to build our lives there. Working and studying is important, but why would I want to leave my friends and family behind? I love the mentality in Twente, and you get a lot of opportunities here. I did not know this when I was studying. I think many of the current students do not realise this either. I think it is a Unique Selling Point for Twente. In the Randstad, you are one of the thousands, whereas here you get the space to show what you can do and develop yourself.”

Renske puts research into practice through the UT’s TechMed Centre

Gyula has found a fun and challenging job at ADG Dienstengroep as New Business Developer. ADG Dienstengroep consists of ten companies that deal with personnel and facility management. Asito, TSN Thuiszorg and Timing are the most famous companies in the region that fall under ADG Dienstengroep. “At work, I work for different labels in the field of concept development or strategy development”, says Gyula. Her boyfriend Steven is also no longer working in Amersfoort, he found the perfect job in Enschede at UT spin-off Xsens, a company that works with motion capturing technology.

“There are plenty of beautiful companies in Twente that operate both nationally and internationally and offer very innovative products or services.”

It is a misconception that you can only be truly ambitious if you go to the Randstad for work; there are plenty of beautiful companies in Twente that operate both nationally and internationally and offer very innovative products or services. Gyula also emphasises this: “I think that most people would describe me as ambitious, but the Randstad does not appeal to me at all. I am there regularly for work, but I prefer working for a family company such as ADG. The mentality and long-term thinking appeal to me much more. I believe that long-term thinking is also part of the Twente mentality. A great opportunity for Twente, because it fits in well with the new generation that is much more purpose-minded.” 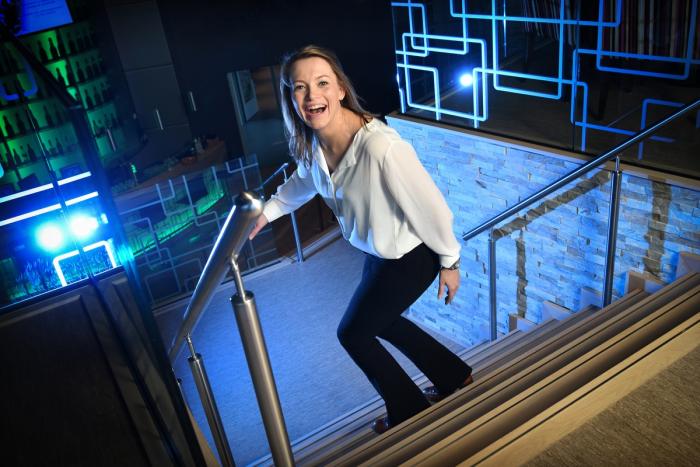 Gyula worked at the Twente Board during a traineeship for the Region of Twente. She developed a concept there where the youth is involved with projects in the region. This eventually resulted in the founding of the Young Twente Board, of which Gyula is now chairman. She is now doing this alongside her work at ADG. “I am very grateful that my employer, Hans Kroeze, allows me to do Young Twente Board alongside my work. For me, that is a very nice combination of business life and the government. I believe that cooperation between education, government and employers is essential for the future of our region. Young people are the future, so their involvement is important. I kind of see it as my mission to give young people a voice in Twente, and to get their opinions in the right places so that we can contribute to Twente together.”