Ellen wants to work on a more inclusive Twente society

A childhood on a farm in Twente in a typical Twente village. The neighbors who used to visit the farm regularly, and with whom you still have a good relationship. A bachelor’s degree at the university, wanderings abroad and creative indulgences at the Royal Theater Academy. That is the story of Ellen Temmink. At least so far. Ellen is focused on the future and wants to be a social entrepreneur. Curious about how she would like to help people? Then read her story below.

A typical Twente youth, does that exist? Maybe not. But if that was the case, I imagine it as the youth of Ellen Temmink. She has spent most of her life on her parents’ farm in the small village of Sint Isidorushoeve, in the municipality of Haaksbergen. Her mother was a librarian, and her father was a farmer. Being part of the village was nothing out of the ordinary. There was the compulsory swimming lesson, volleyball at the Hoeve volleyball club, communion and so on. People had a practical attitude and a sober mentality. A cozy childhood, but it did not fit Ellen. Ellen was looking for something that suited her better, and kept doing so during her studies.

Ellen studied Humanities at the university in Tilburg. After she finished her bachelor’s degree there, she was faced with an important choice: am I going to do a master’s degree, as expected from me, or am I going to follow my heart? Ellen listened to her feelings and thus chose the latter. She missed being creative, and there wasn’t enough space for this at the university. In the end, she chose to go to the Koningstheateracademie (Royal Theater Academy) in Den Bosch. After one year, she dropped out. The study required you to open up completely, and Ellen was not ready for that at that time.

After this, Ellen supported talent development through a new school, and worked in a call center for a while. After saving some money, she left for Chile and Argentina indefinitely. Yet after six months, “home” started to become very appealing again. “I missed being home, so I went back to my parents.” Ellen later decided to go abroad again. She left for Norway for temporary work in a hotel to save money for a trip to Canada. However, she did not reach Canada. Fate determined otherwise. A few days before her departure, Ellen became ill, and the plane left without her. The great thing about this was that she met her partner shortly after, at a summer party in a neighbouring village of Sint Isidorushoeve.

In the meantime, Ellen had experienced great personal growth and got to know herself better. She decided to resume her studies at the Koningstheateracademie. In addition, she found out that she was quite homesick for Twente. Something she already felt during her studies.

“When I was still studying in Tilburg, I went by train with a transfer in Zutphen. Suddenly, everyone had an accent from Twente again. This has somehow always stayed with me. This is where I come from and where I belong. It always gives me a warm feeling.”

Ellen now lives in Hengelo with her boyfriend, and she feels at home. At first, she could do well anywhere in the world, whether it be Norway, Chile, or the south of our country. Now she thinks: “I just have to do it here. Moreover, Twente simply has beautiful nature and incredibly sober people.”

Aniek brings exoskeletons to Twente. “We are ready for industry 4.0

Arian and friends start a creative giant in Twente

A dream career is the only thing missing in Ellen’s life, but she has a clear vision of what she wants and a nice job where she can grow. Ellen is currently a flex consultant at Abeos. Abeos is an employment agency where Ellen mediates between employers and people with practical training. She does this four days a week, leaving her with one day to network and engage in social projects. For example, Ellen was present at the Social Impact Day on the 19th of November. Last year, Ellen found out that her passion is in the field of social entrepreneurship. “That’s my thing! Preferably with other passionate people”. At Abeos, Ellen is learning more about the commercial world so that she can eventually set up a successful business. Her father is also a source of inspiration for Ellen. She now recognises his entrepreneurial farmer’s drive in herself. 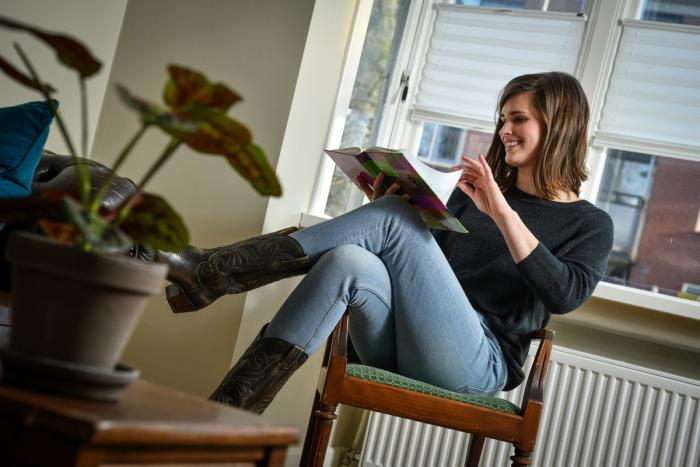 “I want to set up my own company or project office, where people get more awareness in groups.” According to Ellen, everyone has a place in our society. We just have to find or create it. “I’m not quite sure yet: what will my company look like exactly?” Focusing remains difficult for Ellen sometimes. “In any case, it has to do with an entrepreneurial mindset, humor, personal growth, multidisciplinary teams, organisations that struggle with social issues and my processes that offer a solution to that.”

According to Ellen, society is moving in a direction that is not workable for everyone.

“Not everyone has a place. We create jobs that do not provide enough satisfaction. I think that needs to change.”

Ellen wants to work on a more inclusive society by looking at what is possible. Ellen is a broad-minded person, and that also explains her personal growth. That is why she says: “Don’t judge. We all have an opinion so quickly, but you do not know what’s behind it. I believe that you can learn something from everyone, but judgements prevent this. So, if we all postpone that judgement, then I think we got a step further. Also in Twente.”