The electronics in the solar car ensure that the solar energy collected by the solar panel is converted in to forward movement of the solar car.  Solar Team Twente aims to win the race by focusing on using the captured energy as efficiently as possible.

To gain maximum energy from the solar panel, Solar Team Twente uses two systems: SABINE, a solar array balancing interface and JANINE, a Motor Controller Unit. SABINE increases solar cell efficiency, especially for those cells that are in the shade or on a spherical surface. JANINE uses this solar energy to drive the in-wheel motor. This electric motor is a proprietary design by Solar Team Twente, which has been refined over the years.

Continue reading about the talents

A compact battery ensures an energy buffer for the solar car. The battery has been assembled by Solar Team Twente and is linked to a self-developed Battery Management System. The battery enables the solar car to continue driving at full speed in the event of unexpected clouds or rain. Extra solar energy can also be stored during the mandatory inspection stops of the World Solar Challenge.

Energy from the shade

In the World Solar Challenge all teams drive their cars using solar energy, captured from light and radiation. Solar panels consist of solar cells. These cells are divided into groups. Because of shadows (for example caused by the cockpit), dirt or differences in light incidence due to the curvature of the streamlined design the yield of the solar cells vary. A group of cells performs at the level of the least performing cell in the group. SABINE, designed and developed by of Solar Team Twente, makes it possible to capture more solar energy in case of shadow. It has been introduced in 2015 and improved in the years thereafter, helping to save racing minutes.

SABINE is an abbreviation for Solar Array Balancing Interface Not Expected. This system improves solar panel efficiency in case of shadows and curvature of the panel. Conventional solar panels are as powerful as the weakest link (the least performing solar cell), reducing the energy output of the entire panel, which is a series connection. SABINE prevents this effect by balancing energy. In short, the extra energy that is captured by the best performing cells is run through the weakest cell, making it seem to perform reasonably. This is illustrated on the side. SABINE has been introduced in 2015 and has been overhauled this year with a full redesign, making it many times more effective. 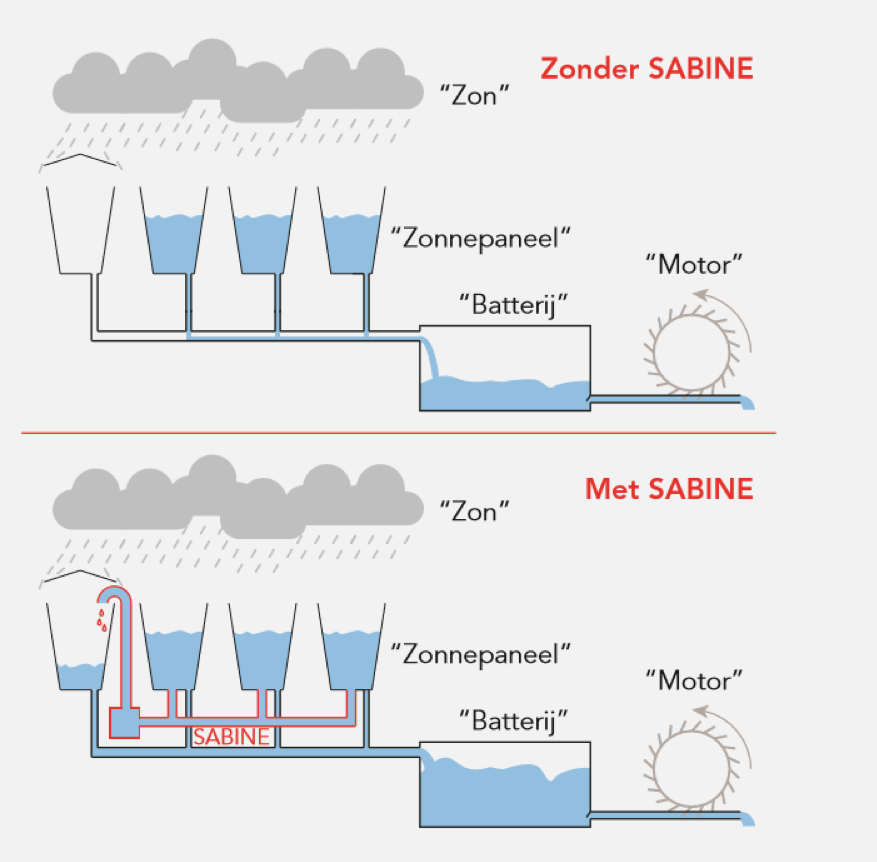 Development of SABINE already started in 2011, when the 0.0 version of the, until then, nameless Maximum Power Point Tracker (MPPT) was conceptualised. The idea was that the maximum power point should be higher than the minimum voltage the poorest performing cell in the series connection generates. Usually, this cell is the one in the shade. SABINE balances the energy levels electronically so that the output level is not pulled down, resulting in a 10 to 20 per cent increase of power output in the shade. SABINE has been added to the DAQ software developed by Solar Team Twente, which is a digital program that analyses driving data. With this software, the performance of SABINE can now also be tracked.

The solar panel is the energy source for the solar car from Twente. As it captures light, it converts its energy to electrical energy, which is then used to charge the battery, in turn driving the electrical motor. Without solar panels, the battery would be drained within a few hours. The panel consists of groups of solar cells that are arranged in a protective and light-catching layer at the top of the solar car. The solar cell distribution is a complicated puzzle. Cells come in two variants: square and cut.

Optimal position towards the sun

The angle of sunlight to the car changes throughout the day as the earth revolves around the sun, making the sun rise, reach its highest point and finally set. The optimal position of the solar panel, therefore, changes throughout the day. If solar cells were to be fixed on the car, there would be moments of inefficiency. Even a slight turn of the road would have a noticeable effect. ELINE, also developed by Solar Team Twente, is an adjustable solar panel, able to tilt towards the sun. This panel maximises the energy output. The team combines this system with SABINE, optimising energy output in the shade, and their Solar Array Heatmap (SAHM), able to accurately determine the energy yield per solar cell. The latter provides valuable information on whether a cell is too long in the shade of something.

Also check out these student teams, run by RED engineers from Twente!

RED E energy consumption equals that of a sandwich maker

The sun: an inexhaustible source of solar energy

Sustainable mobility, earth and sun as an energy source