Frans Schuitemaker is the head of commercial affairs at de Museumfabriek and Rijksmuseum Twenthe in Enschede. He has since started to understand what kind of treasures are being worked with at these two places. His mission: have as many companies and other partners as possible benefit from this. “Whoever embraces these museums will make their world bigger.”

If you ask Frans Schuitemaker what he found when he entered his new work field – after his farewell as director of tour operator Oad – he will not stop talking. “Did you know that de Museumfabriek has a collection of 150,000 objects about nature, technology and culture? And that Rijksmuseum Twente shows art from the Middle Ages to the present day? From Jan Steen to Monet, and from Jacob van Ruisdael to Herman de Vries; you do not need to travel for it, it is all on display right here.” He already knew the museum as a visitor, of course, “but it surprised me what opportunities they have to promote Twente.”

He clarifies that this has everything to do with the story that they tell together, next to the collections' richness. At these museums of imagination, we give shape and meaning to our world as humans. “They are places in which the past, present and future come together and come to life. The questions asked there make it beautiful. You don’t have to be an art lover to appreciate Rijksmuseum Twenthe. The art will explain itself.” 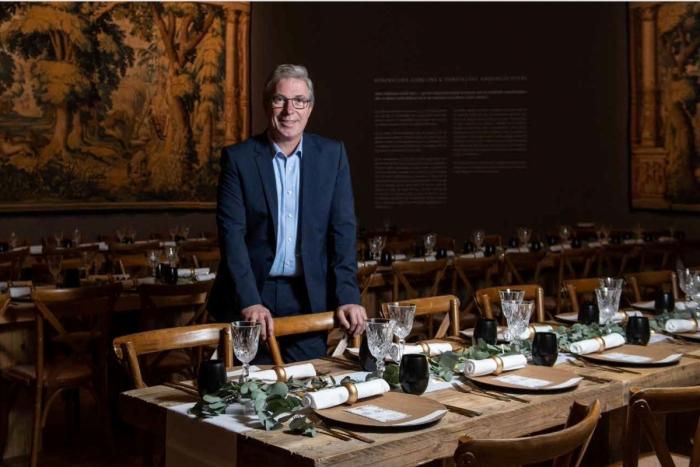 It all happens at the museum at the Lasondersingel in ever-changing exhibitions, so that every visit brings new surprises. The new Wunderkammer in de Museumfabriek a little further down the road offers exciting insights into the connection between things. They are mini-exhibitions that reveal secrets such as: What does modern robot technology have to do with mammoth bones? And what is the relationship between the white lace of a traditional costume hat and the white light in fibreglass?

The Makerspace – where visitors can get to work themselves – is also a new hint about the traditional role of the Twente manufacturing industry. The region snowballed and became the industrial centre of the Netherlands in the nineteenth century, also known as the Iron Age. Rijksmuseum Twenthe, founded by textile manufacturer Jan Bernard van Heek, and de Museumfabriek, located in former textile factory Het Rozendaal are reminders of that time.

Drone radar installed at a testing ground in Twente

According to Schuitemaker, they also show how Twente has continued to reinvent itself time and time again. “There is a direct connection between the iron age and the high-tech manufacturing industry in which we now excel; a dynamic that characterises Twente. Look how beautiful those old factories still are.” The time is right for telling this story: “The iron age is a time that binds us all together, right down to the present day. We can be proud of what it has brought us. These museums can play an important role in that.”

He wants to involve as many partners as possible. The knife cuts both ways for companies, of that he is certain: “culture affects companies in a completely different way than sports do, for example. Whoever embraces these museums will make their world bigger.”

Schuitemaker emphasises that working together with one of the museums also offers practical advantages. “Companies want to promote themselves, but inviting buses full of schoolchildren often does not work. You also have a greater range through us, and you can be sure that a programme meets educational standards.” Which, according to him, also means that bad advertising is out of the question. Schuitemaker also wants to involve regional companies and institutions with the Wunderkammer, where they will all have their own educational programme. “So that we, together, can show how this region deals with themes from the past, now and in the future.”

He has also noticed that Rijksmuseum Twenthe still has a lot to gain. “200 entrepreneurs were here at the Prinsjesdag breakfast, surrounded by the beautiful tapestries in the Gobelinzaal. A first time, for many of them.” Companies can work with the museum as a “Benefactor”, or, as jubilee funeral company Vredenhof did, give their employees a family pass that gives them and their family access to both museums for a year.

New opportunities are presenting themselves in de Museumfabriek because of the Twentelab. The area where most of the collection is located and many volunteers are active alongside professionals is still closed off. It will be a crowd-puller as the largest restoration studio in the East. Part of this Twentelab will be a collection and knowledge centre, with access to the 1.6-kilometre-long line of books that both museums possess. An inviting environment for research, like one that Schuitemaker is currently discussing with Rabobank: “Why was the very first Raiffeisenbank ever established in Lonneker?”

It pays off to be yourself