Craftmanship from Twente contributes to a world first

At a windmill on the Danish coast near Thyborøn, its conventional generator with permanent magnets has been replaced by a superconductor unit. It saves half the weight, is much more compact and delivers the same amount of power, and requires less rare earth elements to build. A world first to which researchers from the University of Twente have made an important contribution by developing and testing the superconducting generator.

The superconductors replace the large and heavy magnets used in a conventional windmill. Just like in an old-fashioned bicycle dynamo, the magnets rotate around coils, converting magnetic into electrical energy. Powerful magnets can also be made with coils of superconducting cables: they are lighter, more compact and use fewer rare earth elements, such as Neodymium.

According to the Institute for the Analysis of Global Security (source: Groene Rekenkamer), one tonne of radioactive waste is created when producing one tonne of rare earth metals. Thanks to the researchers at the UT, the amount of required rare earth metals, thus ending up in the environment, is strongly reduced. This turbine is lighter, resulting in a lighter tower construction. Also, the turbine is smaller: road transport is less complicated. This windmill, even more than others, contributes to improving our climate.

Superconductors, if cooled, conduct electricity with zero resistance, allowing large currents and therefore strong magnetic fields to be created. The magnets in the new rotor are constructed from superconducting tape: a thin layer of superconducting material is applied to a flexible steel support, conducting the current. Compact cryocoolers, implemented in duplicate, rotate with the rotor and ensure a temperature of minus 240 degrees Celsius.

The research group from the University of Twente collaborated with TNO, machinefabriek Boessenkool from Almelo in Twente and other Dutch enterprises. The European project EcoSwing allocated two million euros for the contribution from Twente. Researcher in the UT research group Energy, Materials and Systems, dr. Marc Dhallé, says that “our group was involved in everything cold”. This includes testing taped and magnet coils, finding optimum cooling and assembling the entire rotor. 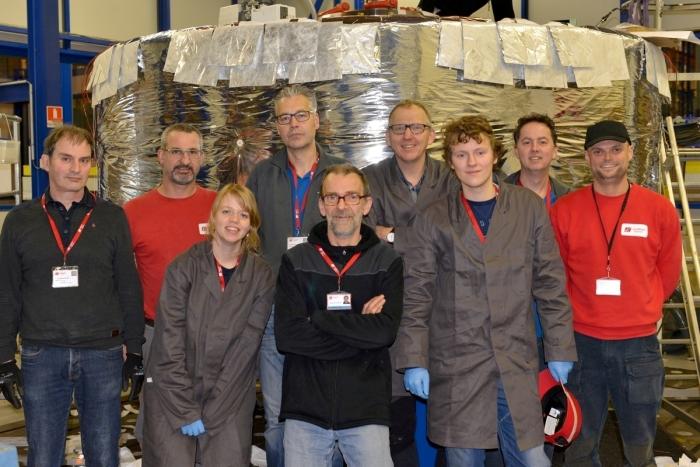 Ready for strong winds at the North Sea

with a diameter of four meters - almost one and a half meters less than the conventional ones - was shipped to Thyborøn after tests at the Fraunhofer Institut für Windenergie und Energiesysteme in Bremerhaven. In Thyborøn it was installed in a GC1-type mill manufactured by Envision. It delivers 3.6 Megawatts, has two rotor blades with a total diameter of 128 meters and its tower is 88 meters high. In the coming period it will become clear whether the new windmill concept meets expectations: will the superconducting generator perform as expected, even in the strongly varying conditions in the North Sea?

certified precision welding abilities and their precise machining processes of extreme size. Boessenkool has developed the cryogenic static housing, accommodating the superconducting magnets under vacuum. The housing serves to cool the superconducting magnets and ensures structural stability. During the assembly, it turned out one of the magnets did not function properly. After extensive consultation, the Boessenkool employees were asked to carry out a daring housing repair. Although this was not included in the scope of the project, Boessenkool carried out the risky repair successfully.

Because Boessenkool was involved, a proper vacuum was guaranteed, but thanks to the repair all 40 magnets are now also superconducting. This effort is a great example of the commitment, decisiveness and craftsmanship in Twente!

The EU-funded EcoSwing project focuses on developing the first superconducting, low-cost and lightweight wind turbine drive in the world, to be demonstrated on a large-scale wind turbine. The project is a Horizon2020 project (grant 656024). In total, the project has a budget of thirteen million euros, ten of which come from the European Union. In addition to the University of Twente, partners are: Envision Energy (DK), ECO 5 GmbH (DE), Jeumont Electric SAS (FR), Delta Energy Systems GmbH (DE), THEVA Dünnschichttechnik GmbH (DE), Sumitomo Cryogenics of Europe Ltd (UK), DNV GL Renewables (DE) and, as mentioned, the Fraunhofer Institute (DE).

EuroMouldings from Nijverdal aims for 100 per cent ‘good’ plastic

Innovating together: the best way of adapting to climate change